CASCADE is a GEM-based hybrid solid converter gaseous detector for efficient and position sensitive detection of thermal and cold neutrons. The detector concept is based on using solid neutron converter layers in a common gas detector system, which guarantees sub-microsecond absolute time resolution and insensitivity to Gamma-rays. GEM-technology  provides inherently a rate capability on the order of 10^7 n/cm^2s. The GEM (= Gas Electron Multiplier) was developed by F. Sauli at CERN’s gas detectors developement group (GDD) in 1997. In the CASCADE detector, the GEM is operated in a mode transparent for charges. It serves as the perfect substrate for the solid 10-Boron converter, allowing to cascade several converter layers one behind the other without loss of position [1].

Sketch of the detector: a cascade of GEM-foils coated on both sides with 10-Boron and 10-Boron-coated driftelectrodes. Primary electrons, produced by the escaping charged particle of the neutron conversion, are guided undistorted through all of the GEMs onto an arbitrary readout-structure.

This concept results in an entirely disentangled neutron detection scheme: Neutron conversion, charge transport and amplification as well as charge collection result to be entirely independent processes. In consequence, an enormous technical advantage over current detector technology is at free universal disposition for specialized applications.

The detector works with ordinary counting gases under normal pressure. So lightweight, easy to handle and in particular large area detectors can be constructed. Cleaning by constant throughput of fresh counting gas avoids ageing effects, which guarantees long term stability and long lifetime of the detector.

The neutron detection bottleneck shifts to data read-out electronics and its bandwidth. High energy physics has already been there, and we can learn how to approach and solve this challenge: Highly integrated ASIC-technology allows to realize thousands of individual detection channels at non-proportional cost. We have transferred ASIC-technology from high energy physics to neutron detection. Rate capacity can be realized according to needs through the ASIC electronic front-end paired with an adaptable integrated FPGA data processing unit. Here, data histograming can in principle be realized on line within the module on many million freely configurable counters (local RAM on board).

[1] Any use of GEM foils in detectors is protected by patents owned by CERN and requires a written license from CERN. Such a licence is free of charge for R&D purposes. Commercial licenses can be granted on conditions to be agreed with CERN. More information about GEM licencing can be found at http://cern.ch/gem.

The 10-Boron based, high contrast detector solution for high intensities!

The CASCADE 2D-200 Detector is a self sufficient detector system comprised of a detector frond end and an integrated detector readout system with on board histograming electronics. It is all integrated into one box!

The CASCADE-M 2D-200 Detector is a self sufficient detector system comprised of a detector frond end and an integrated detector readout system with on board histograming electronics. It is all integrated into one box!

The CASCADE-U detector systems (2D-100 and 2D-200) are designed for high intensity neutron applications with high demands on the dynamical range, contrast as well as background. They combine technology from high-energy physics research with the specialized and particular necessities at neutron research institutions. CASCADE-U is a state of the art, self-sufficient detector system for the efficient, high rates detection of Ultra-Cold-Neutrons. It is comprised of 10-Boron based detector front-end, integrated detector readout electronics and a DAQ system with on-board histograming electronics, all integrated into one box! Once externally configured, it will perform predetermined measurements. 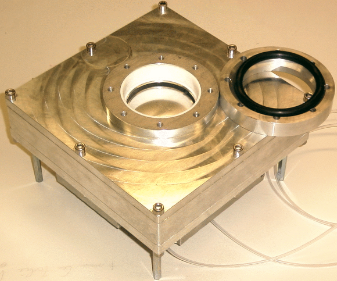